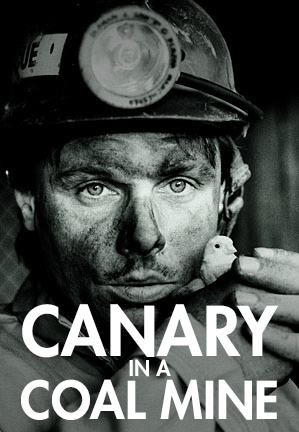 I was looking back over some notes from previous positions and I came across an instance where I had experienced what I called a Canary Fail. I am sharing this in the hope that some of you can learn from this rather than having to experience this for yourselves first hand.

This was quite simply a couple of situations where the customer found issues I knew were there but had not yet raised them with my team. I have always maintained that one of the primary purposes of a tester, in the context of discovering and providing information about the quality of the product, is to be the canary in the coal mine. In other words to be the early warning system, to raise the alarm to avert disaster.

Why is it then that I failed in this regard? Well, there are no excuses, I was wrong and I really should have known better. This was a lesson well learnt! Of course there are plenty of contributing factors that conspired to help me make poor decisions, and I am sure these will be familiar to at least some of you;

The root cause of my canary fail was that I held off on reporting these issues because I was concerned I was wrong, that my understanding and thus my testing was flawed in some way and this would lead to me crying wolf! This in turn would result in me losing credibility as a tester and thus weaken my ability to advocate for defect fixes.

So the lesson I learned painfully was to raise a flag early and to talk through my concerns openly. Then to trust in the professionalism of my colleagues to forgive me when I am mistaken but to treat each flag I raise with respect and not discount my concerns even if I cried wolf last time.

This site uses Akismet to reduce spam. Learn how your comment data is processed.